Michael Hankins is a Lake Havasu City resident who's fascinated with rattlesnakes. With his new Outskirts Press book, Arizona Rattlesnake Tales, he's betting other people are, too. The book is a compilation of hundreds of newspaper articles detailing frontier Arizonans' encounters with the dreaded "rattler," stories Hankins gathered over many years of research. Via email, Hankins spoke with Arizona Highways about the book, his background and his soft spot for one of Arizona's best-known reptiles. (This interview has been condensed and edited for clarity.) 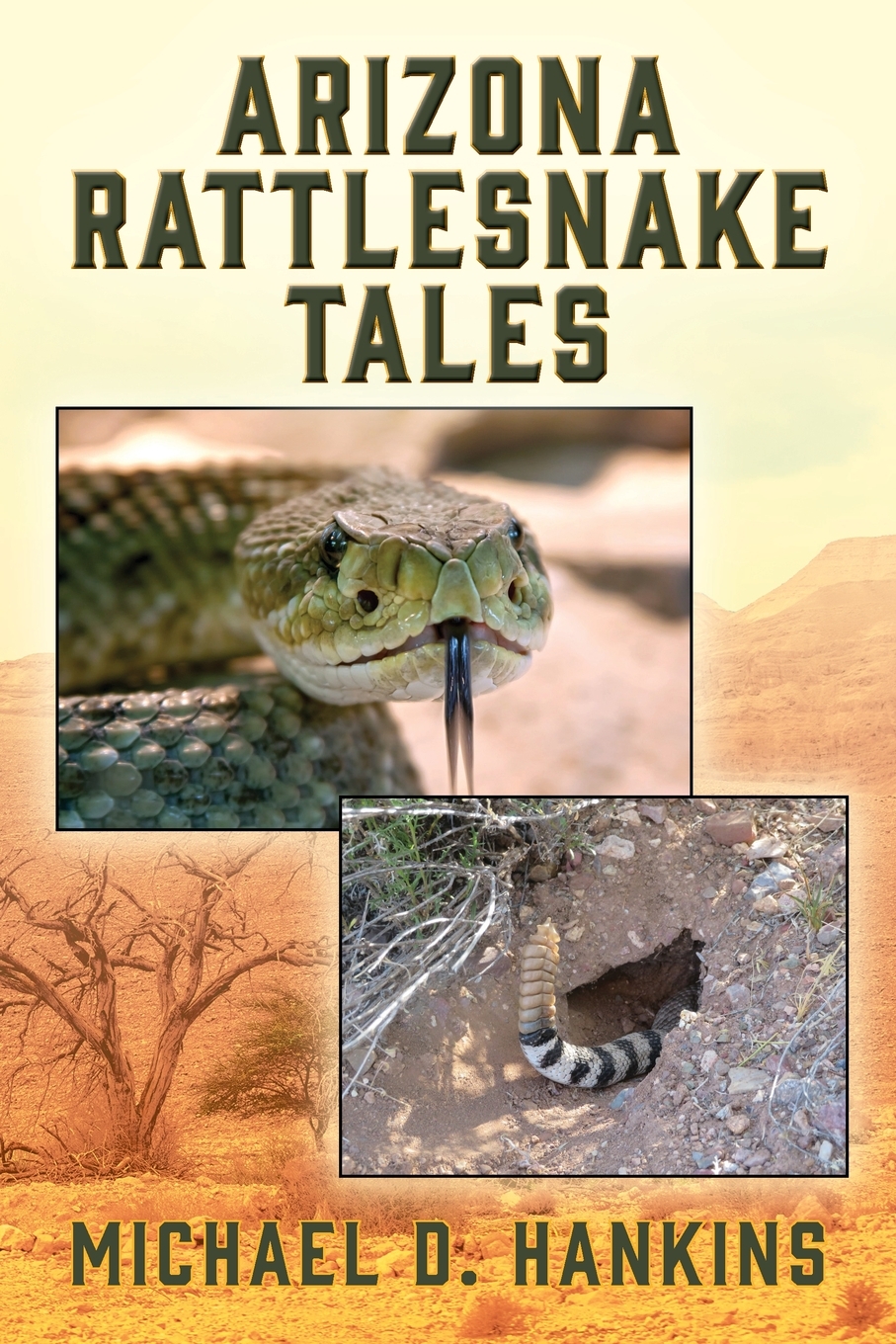 Tell us about your background and how you ended up in Arizona.

My first trip to Arizona was in 1957. We were headed to Victorville, California, on Route 66 to my father’s new job assignment at George Air Force Base. Somewhere near Holbrook, Dad wheeled into a gas station to fuel up. This was in June, and our car had no air conditioning. The vehicle was gloss black, which greatly amplified the inside temperature.

A curious owner of this garage peered into the back seat, noticing my brother and me motionless. Dad and Mom believed we were simply sleeping. This gentleman warned my parents that if they didn’t get us cooled down, "them boys will not survive!” Jim and I spent the rest of our journey hovered over a block of ice placed inside a pan on the floorboard of Dad’s Mercury.

Part of my reason for coming back to Arizona had to do with my love of Western movies. I’d read that much of that filming took place in Old Tucson. We visited the town, finding it to be most interesting. Even the kids, who were quite young at the time, enjoyed going there.

Residing in Alaska for 45 years gave us many opportunities to fly down. My wife, Joleen, and two children, Gunnar and Miranda, spent almost every winter vacationing in Phoenix and Lake Havasu City. Joleen and I loved the state so much that we decided to move here upon retirement. We’ve been in Lake Havasu City close to 10 years now.

How did you get interested in snakes, and rattlesnakes in particular?
My first encounter with rattlesnakes was in, of all places, Selma, Alabama. A family of rattlers claimed a tree in the middle of our school playground as their home. The Southside School custodian promptly took care of them. An encounter with a water moccasin also occurred in this state. I was wading in Soapstone Creek near Selma when adults began yelling at me from shore to get out of the water. Spotting what I thought was a stick headed my direction, I was snatched out of the creek just in time by some quick-thinking individual.

The sole fascination with rattlesnakes came at an early age after seeing them in movies, or reading about their dangerous demeanor in Western magazines. Rattlesnakes seemed to always make an unwelcome appearance in both entities. There was something about the unmistakable sound of a rattler that placed me on edge while sitting in a theater seat or on the couch.

You've collected hundreds of newspaper clippings about rattlesnake encounters.
I’ve been a big connoisseur of Old West articles for over 50 years: True West, Frontier Times, Golden West, Real West and, of course, Arizona Highways. Some kids spent their lunch money on comic books, while I used mine to purchase cowboy-related periodicals. Almost every Western story had some hair-raising-tale regarding a killer rattlesnake. As I became older, I wanted to separate fact from fiction. Beginning in the 1980s, a search began for actual accounts of people bitten by rattlers.

It was slow going at first. I had to painstakingly search through microfiche at Arizona libraries while we were on vacation. In rare cases, vintage newspapers were available to look at. Research was hard to do as my wife and kids had more important things on their agenda, like hitting the swimming pool or shopping. Of course, there was no internet back in the '80s. When the computer finally came along, eBay was born. I was able purchase a few old Arizona newspapers with snake stories, along with several vintage rattlesnake photos from that website.

Eventually, colleges and libraries began to scan and place old newspapers online. My collection of clippings began to expand after that. While visiting the Mohave County Museum of History and Art, a gentleman there showed me a couple of pay sites where I could search for rattlesnake specifics. That’s when I hit the jackpot. At last count, I’ve accumulated over 500 articles dating from 1866 to present.

How did the concept for this book come about?
The idea came to me in a most unusual way, as I’d never contemplated doing a book. The process began by sharing my material on Facebook. I was attempting to make a few female friends squirm. There’s something about snake and spider stories that causes people to shudder. All in all, though, friends and family found the tales more interesting than scary.

Joleen and Miranda prodded me into placing the information into book form. I was initially hesitant after hearing horror stories about publishing and publishers. I’d been an automotive mechanic most of my life, knowing absolutely nothing about book composition. I did write several historical articles for magazines and newspapers, yet it was strictly a hobby. A lengthy rattlesnake book project did not sound like fun! After checking with a copyright attorney, I was informed I could legally only use material that was dated prior to 1924. At that point, I considered my project dead in the water.

Having in my possession less than 200 articles composed before 1924, I assumed it wasn’t enough for a book. I went ahead and sent this material off to a publisher, figuring they’d think the same. Turns out, there was sufficient data to work with. My publishing agent enhanced most of the scanned images and reconfigured them as well. A good portion were blurred or hard to read. Printing presses in the 1800s and early 1900s caused ink to easily smear or smudge. We elected not to retype the stories, wanting readers to experience the crudeness of early publications. Although some of the stories are still out of focus, overall, it was the right direction to take.

What was the most surprising or unusual thing you found during your research?
Easily the most unusual abnormality I found during my research was that savvy freelance writers sometimes sold their material to newspapers long after an incident happened. I uncovered the same stories in different newspapers years after they'd first been reported. The most extreme case was a rattlesnake story repeated some 10 years down the road, with no mention that it was old news. Not only did I find this common practice with rattlesnake tales, but it was true with other attention-getting stories as well. I suppose when times were lean, hungry reporters had to do whatever it took to eke out a living.

How long did the research and writing process take?
My research of rattlesnakes ran over a span of 40 years. The last 10 years presented me with the most material. A couple of weeks were needed to write the foreword and conclusion, including compiling all usable data and sending it off. Much thanks goes to Outskirts Press on knowing how to professionally manage those obscure scans and photos and make them presentable. That portion of the project took two months. Looking back on things, it was actually a painless procedure.

Where can people get the book?
Folks can purchase Arizona Rattlesnake Tales online at Amazon, Barnes and Noble, Walmart, eBay and Outskirts Press. The Mohave County Museum of History and Art has copies for sale in their gift shop. I’m hoping other shops do the same. I was told by a longtime park ranger that besides being asked about the Grand Canyon, rattlesnake inquiries from tourists are at the top of their "most questioned" list.

What should people know about encountering a rattlesnake in the wild?
I’m a conservationist at heart. Unlike early pioneers did, rattlesnakes do not need to be needlessly slaughtered just because they’re in the way. In most cases, they’ll only strike or lunge out half the length of their body. They won’t leap or jump on you from long distances, like mountain lions. Hollywood can be thanked for placing that misnomer into people’s minds.

If you should come across a rattlesnake, do all that’s humanly possible to back away or wisely skirt around it from a safe distance. Generally speaking, in most Arizona towns and cities, there are professionals who will remove and safely relocate rattlesnakes without killing them. If by chance you are bitten, immediately seek medical attention!

The Phoenix Herpetological Society in Scottsdale is renowned for taking in reptiles of all types, both wild and domesticated. I totally support the work they do do in helping these fragile creatures survive. A trip to view their facility is well worth the time. Ten percent from the sale of Arizona Rattlesnake Tales goes to help that organization.

Q&A: Meet Our Newest Contributor, Sunnie R. Clahchischiligi
The April issue of Arizona Highways (on newsstands now) is all about horses in Arizona, and it…