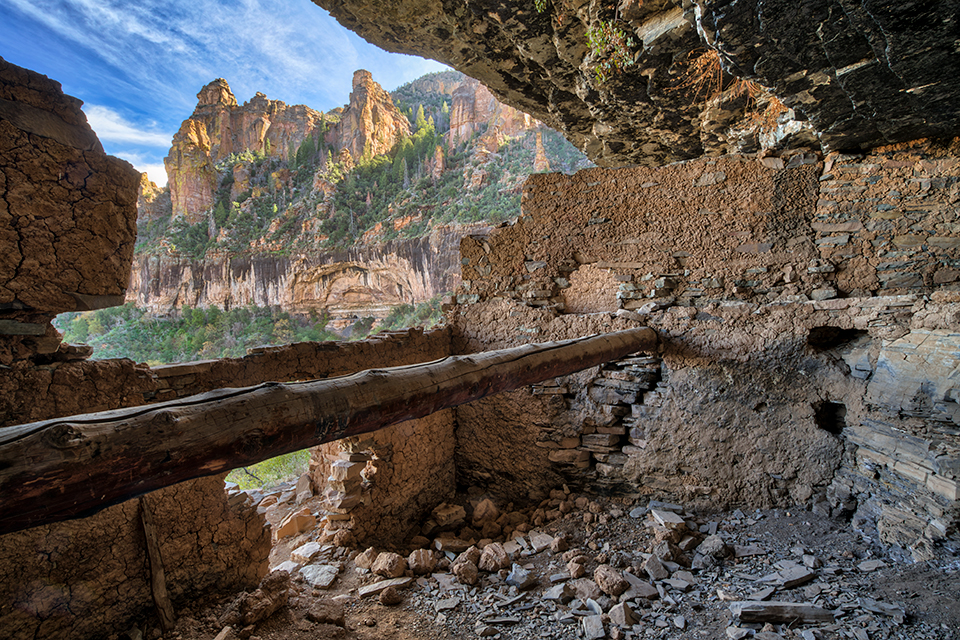 “My daughter, a friend and I visited this Tonto National Forest ruin in late October, hoping for fall color in the maples. After camping one night and changing a flat tire, we splashed across a deep stream and started grinding up a precipitous mountain slope. When the road got too rough, we parked, shouldered our packs and hiked up a steep, washed-out mine road, then an even steeper trail. We finally reached the mouth of a narrow canyon, and after a difficult trek through thick brush — with my tripod snagging every possible branch — and along a narrow ledge, we reached the first of three sets of ruins. We didn’t want to tackle the hike and the road in the dark, so we spent about 90 minutes eating lunch and making photos before heading back. The Salado people who built these dwellings must have had some serious enemies 700 years ago to live in such an inaccessible place. And they must have been a lot tougher than me.” 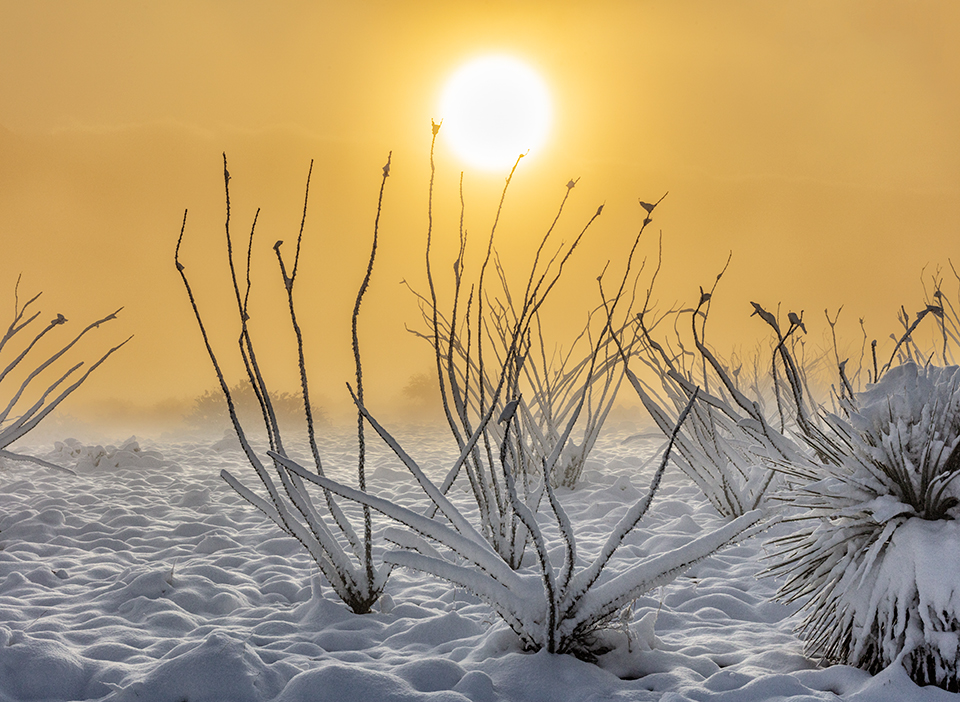 “I’m constantly watching the weather, and I thought a far-reaching storm this past February would bring snow to the Sierra Ancha, where I’ve scouted extensively over the years. I knew I wanted to photograph at the edge of Parker Canyon but wasn’t sure I could get there. I began hiking before sunrise, and in the dark, the snow seemed deeper than it actually was, but the 2-mile hike was relatively easy. However, clouds and mist blocked everything from view. When the sun started to rise, there was a little bit of clearing and the mist was truly beautiful. I was overwhelmed by what was unfolding — everything was constantly changing. I was standing in front of these ocotillos as the sun rose behind them. The sky was so yellow, and the snow looked like whipped cream. I was anxious to catch the scene before it disappeared.”

“This is a remote, free-standing 40-foot arch with a 20-foot interior. There are no roads to it, other than a jeep two-track about a mile on the other side of the mountain. I’d heard of the arch from a local rancher who’d given me a general location, but this area is full of huge boulders and deep canyons. Luckily, Google Earth shows a shadow of the arch, so I knew how to reach it. The hike in was grueling, and I knew hiking out at night would be even more difficult, but I wanted to photograph the arch in the last light of the day, so I went for it. The rancher asked me not to reveal the location or the name he’d given the arch. Instead, we decided to call it Scorpion Arch because of its resemblance to a scorpion’s tail. As I write this, I’m preparing to head back out to shoot a Milky Way image from the opposite side of the arch.” 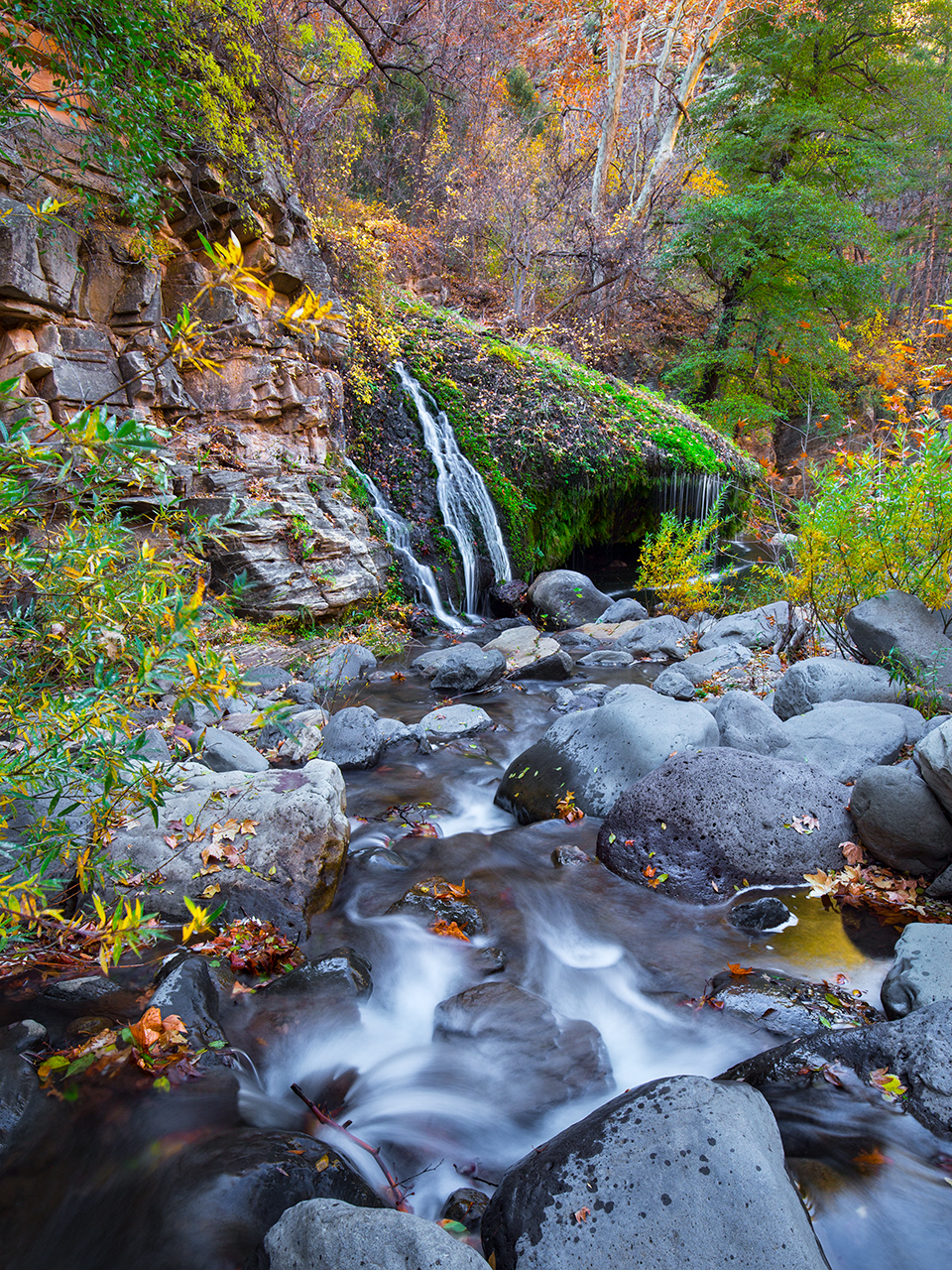 “I love West Clear Creek, especially the rugged central portion, and I always thought an autumn shot through this stretch would be unique and beautiful. One October evening, I left the house at 10 p.m. and was at the creek turnoff by midnight, but within a half-mile, the road got too rough for my SUV. From there, I rode my mountain bike through the night, dodging boulders and climbing steep hills with all of my gear on my back. I finally arrived at the trailhead, locked my bike to a tree and began a steep, slippery hike into the canyon. I reached the creek, set up camp and slept for a few hours, then got up and got to work making photos. Scenes quickly began to unfold in the morning light, and I felt lucky to see this iconic place decorated in beautiful fall colors. As quickly as the light began, the sun was overhead and it was time for me to pack up and leave, but I had a memory card full of unique images, along with a story that kept me going all the way home.” 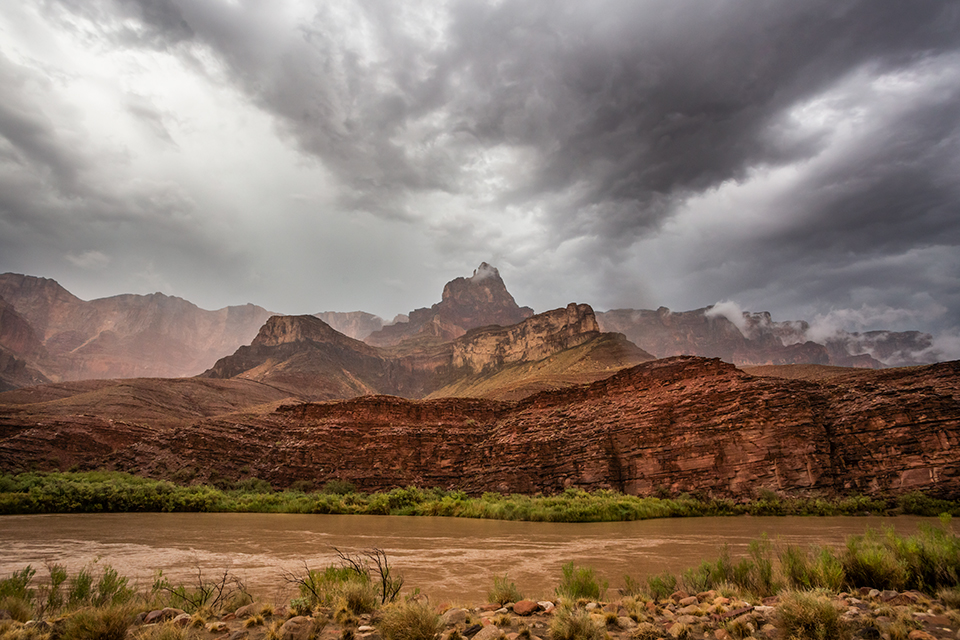 “I made this photo in August, on the sixth day of a Grand Canyon rowing trip. An intense monsoon storm hit while we were at the Little Colorado River, and lightning struck the buttes above and spots inside the Canyon. We huddled under overhangs before leaving the Little Colorado to camp downstream. It was my night to cook, and as I was setting up the kitchen, the wind picked up and I saw a tent rolling over the ground. I ran to weigh it down, then looked to the south. The low clouds had lifted slightly and exposed Comanche Point and the Palisades of the Desert, with a few clouds pouring over the upper cliffs. I grabbed a few rocks, tossed them into the tent and ran to get my camera. By then, it had started raining dime-size drops, and half of my images were ruined by water on the lens, but I snapped a few photos on the run — including this one.”