The Custer Trail Ranch in the Dakota badlands is where it all began. In 1879, that outfit was the first to use the term “dude ranch.” In Arizona, there’s no definitive answer on which came first, but the Circle Z, south of Patagonia, claims to be the oldest continuously operating dude ranch in the state. That, too, is uncertain. What we do know is that by the 1920s, there were at least 10 legitimate dude ranches here. And by the 1930s, hundreds of others had joined the crowd, many in an effort to stave off bankruptcy when beef prices were mired in a bear market.

Like the characters in Yellowstone, each dude ranch, a term often used interchangeably with “guest ranch,” had its own personality. “Some have retained the simplicity of life of the old cattle ranch,” Mrs. Lamar Cobb wrote in our October 1931 issue, “while others are the last word in luxury, affording a variety of entertainment.” The common denominators were wholesome food, a return to nature, dramatic scenery, glorious winter weather, relaxation, camaraderie, romance and adventure.

In an interview with Arizona Highways in the late 1970s, Sheila Moore of Philadelphia talked about the many ranches she’d visited in their heyday. “One Phoenix ranch sent their wranglers out to meet our train on horseback,” she said. “They galloped along the tracks shouting ‘Yippee’ and ‘Yahoo’ and fired their guns as a token of welcome.”

Sadly, the allure of dude ranching began to fade in the 1950s. And today, the vast majority of the old ranches have shut down. Gone, too, is the spirit of the unknown that came with a Jazz Age visit to the Old West. But we do have photographs, and for that we’re much obliged.

Editor’s Note: To learn more about the restoration process we used for this portfolio, see the February 2023 Photo Editor Forum. 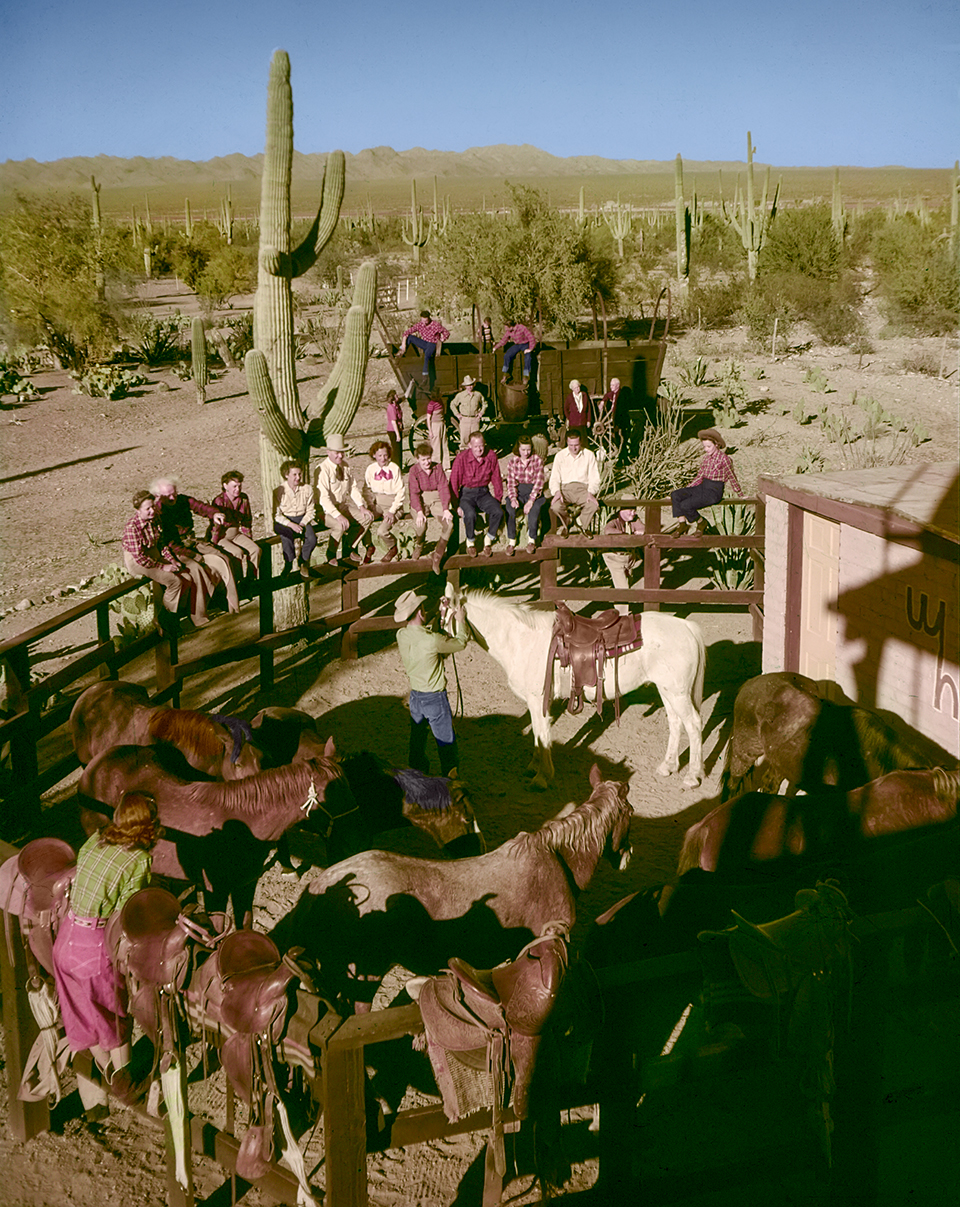 Wild Horse Ranch guests watch a horse-related demonstration. Food was “a matter of pride” at this Tucson ranch, which charged $60 per week in 1948. In addition to equine activities, the ranch was known for birding, according to a 1973 feature in the Tucson Daily Citizen. The manager at the time set up an elaborate birding blind that guests could use to observe birds at several watering areas. 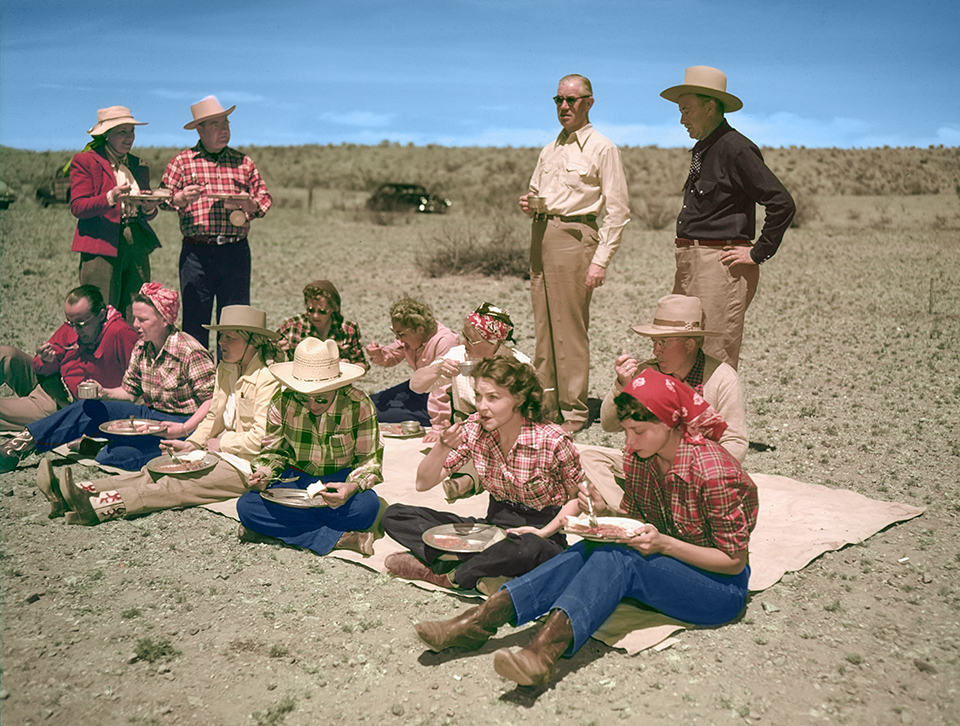 Trail riders at Kenyon Guest Ranch in Tubac enjoy a hearty meal. The ranch was founded by William Allen in 1937 and was named after Allen’s alma mater, Kenyon College in Ohio. The ranch offered rodeos, polo and trips to Mexico, and visitors stayed in stone guest houses built around patios. The cost in 1947 was $65 per week. The outfit later was owned by Russell True, operator of the White Stallion Ranch and other properties, before closing in the fall of 2021. 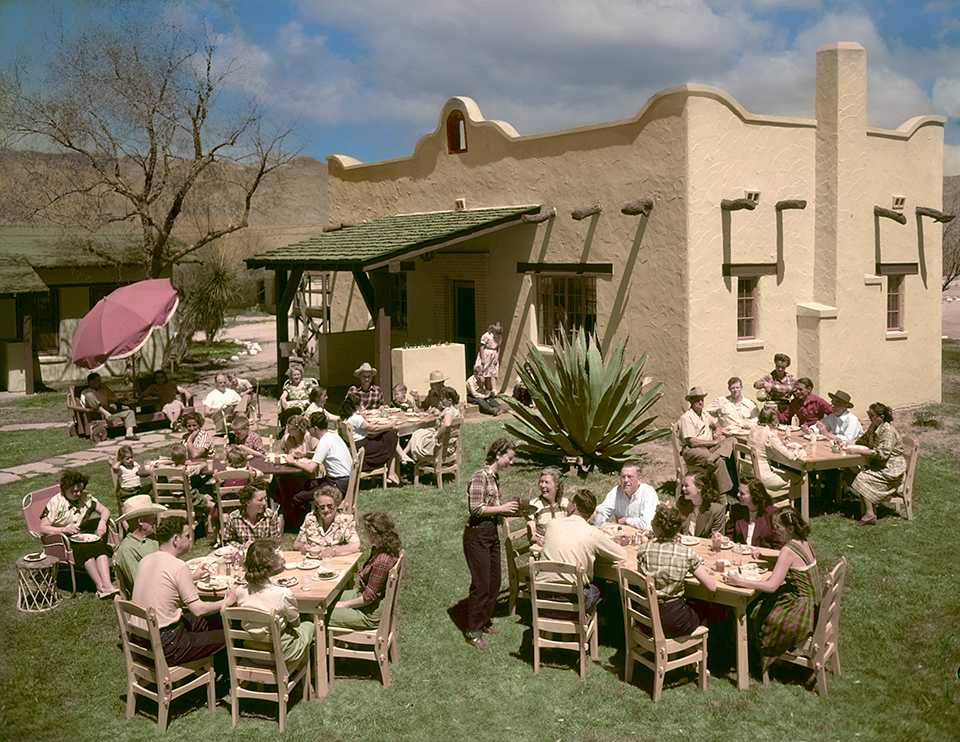 It’s mealtime at Desert Willow Ranch in Tucson, which offered a “special dining room and entertainment program for children.” In 1957, the Daily Citizen reported that the Desert Willow, located on Tanque Verde Road, could accommodate over 100 guests, more than any other ranch in the state. As is the case with many former ranch properties, the Desert Willow site is a housing development today. 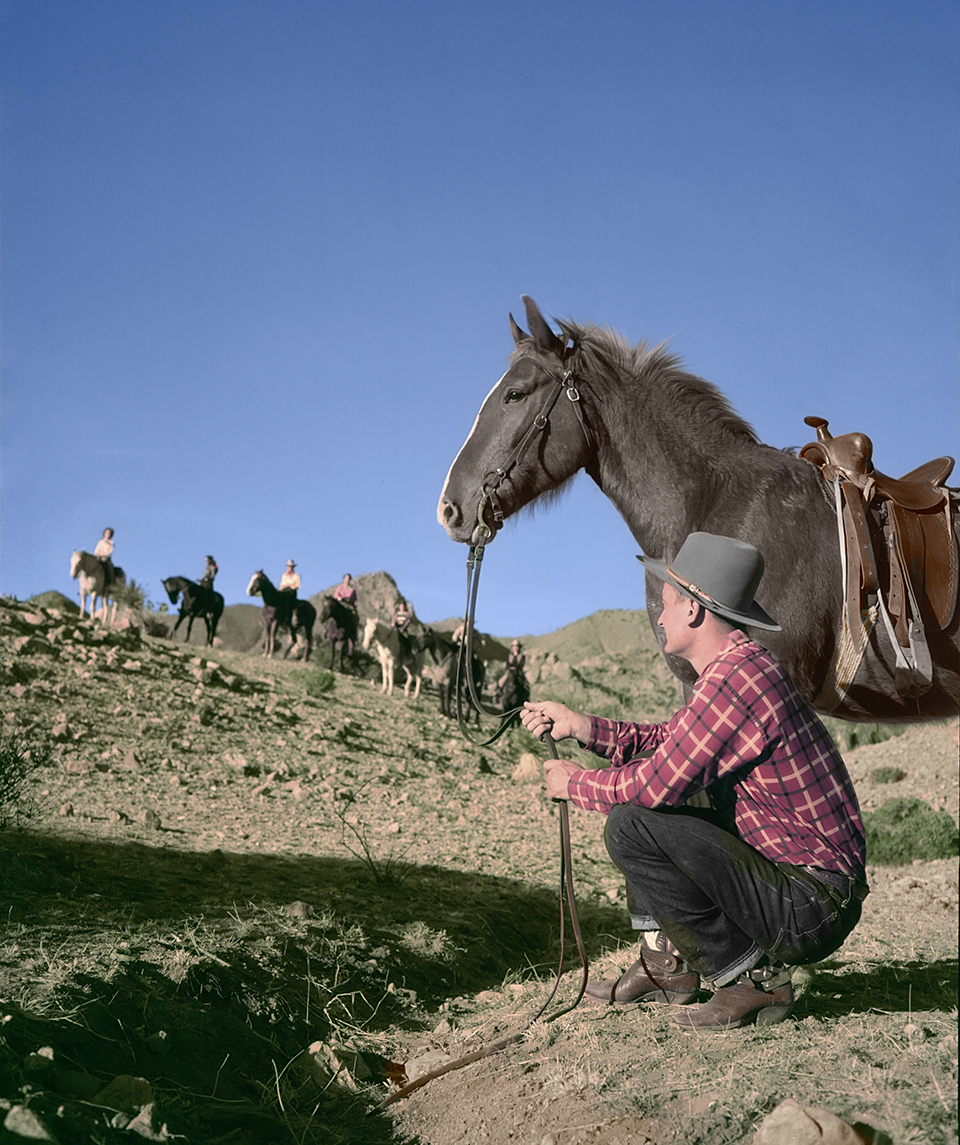 Trail rides were a key attraction at the Em-Bar-Bee Ranch, at the foot of the Swisshelm Mountains north of Douglas. In 1948, the ranch was advertised as “one of the newest and finest guest ranches of the Southwest.” It later became the Cochise Lodge and Guest Ranch before closing in 1977, after its owners and two ranch employees were murdered. 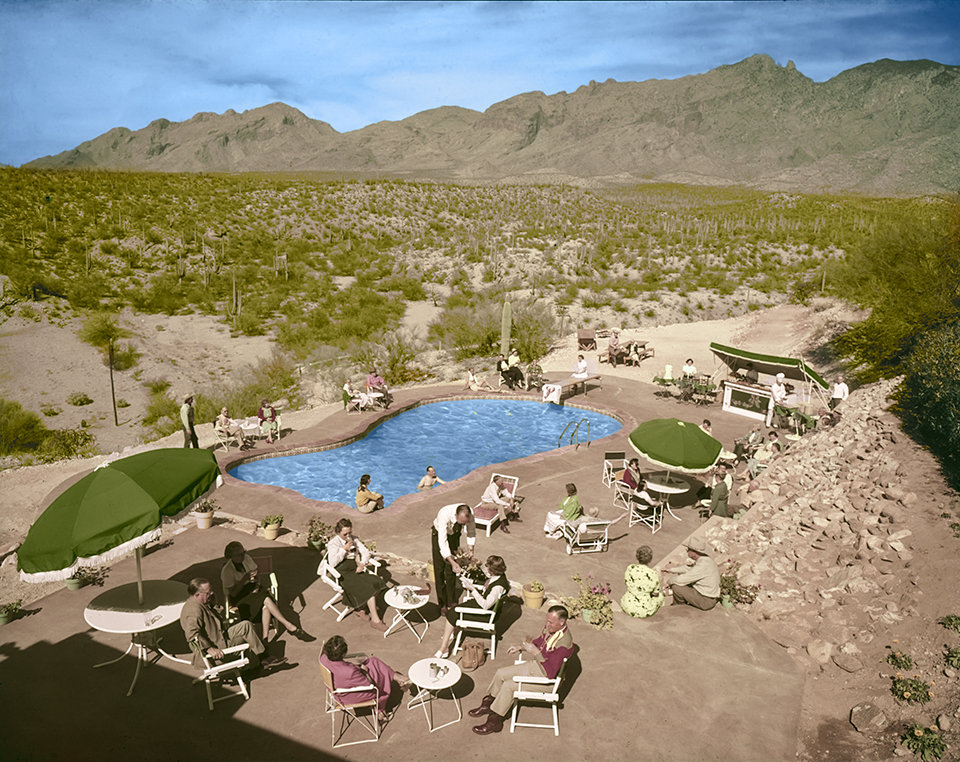 A swimming pool abuts a wide swath of the Sonoran Desert at the Hacienda del Sol in Tucson. The ranch was founded in 1929 by John and Helen Murphy as a school for the daughters of wealthy families with names such as Vanderbilt, Pillsbury and Westinghouse. The property was converted to a guest ranch in 1944 and attracted celebrities such as John Wayne, Clark Gable and Katharine Hepburn. The season ran from November to May, and in 1947, guests paid as little as $12 per day. Tucson has grown around the property, but the Hacienda del Sol is still operating today as a luxury hotel, and the pool is still there. 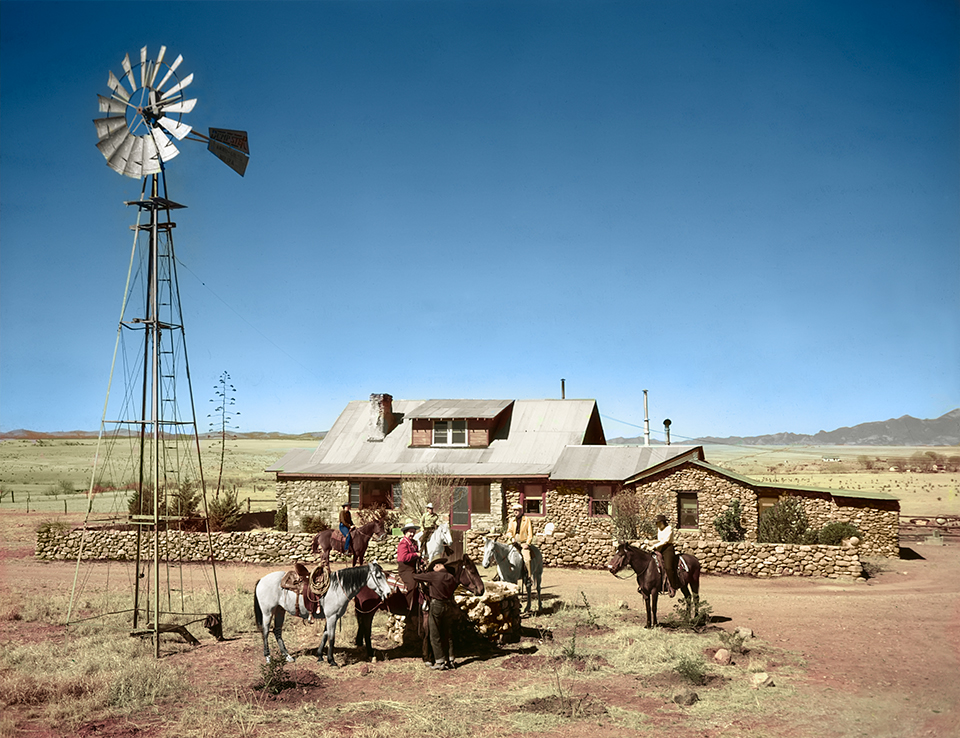 In contrast to Arizona’s larger guest ranches, the Mustang Ranch in Elgin, near Sonoita, featured a more intimate experience — in 1948, it offered accommodations for only eight. It billed itself as “a real cow ranch … with excellent horses, picnics and pack trips.” Unlike most guest ranches, the Mustang was open year-round and welcomed young people and children. The cost in 1948 was $150 per month. 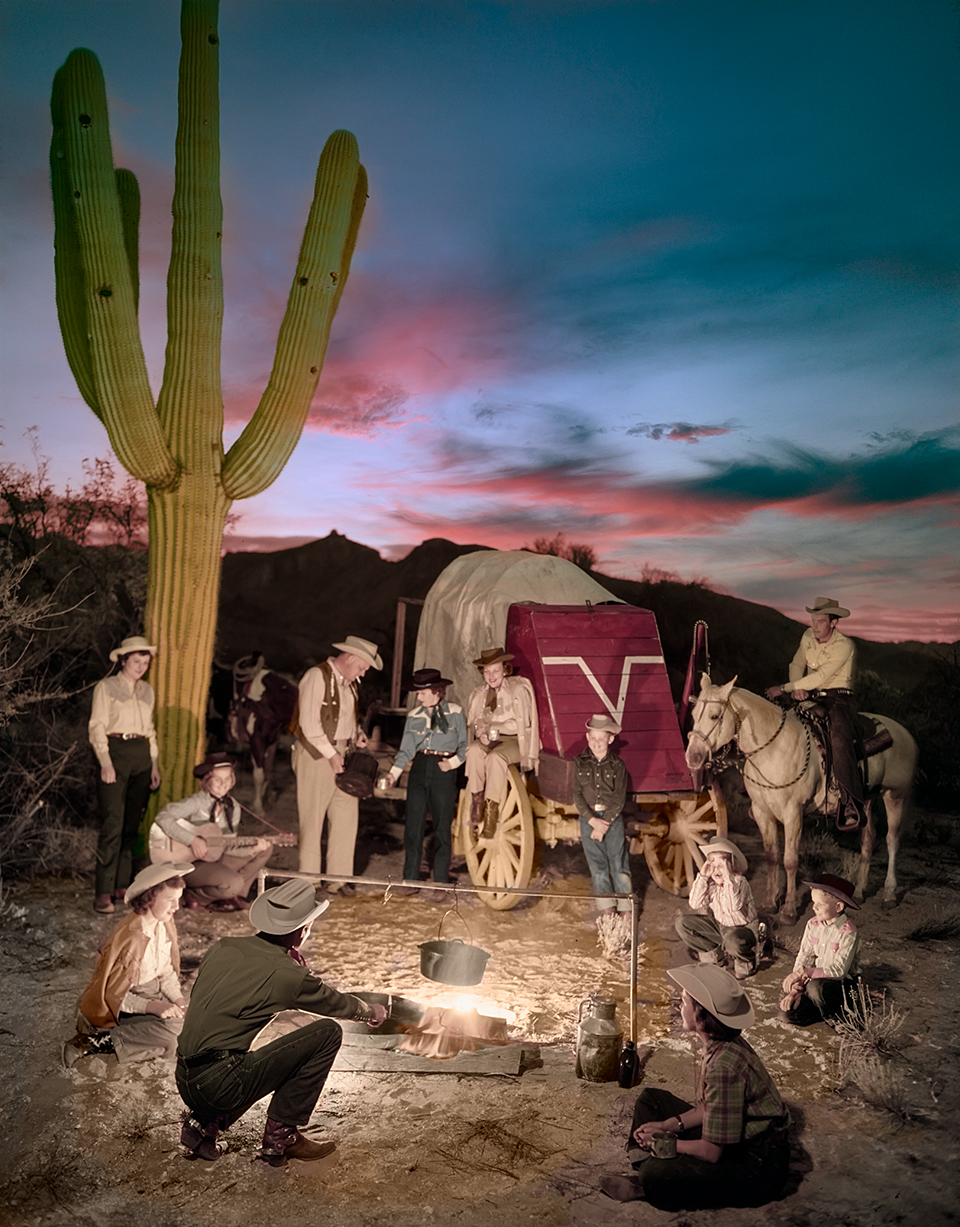 ABOVE AND BELOW: Guests of the Tucson area’s Flying V Ranch enjoy horseback rides and a campfire dinner amid tall saguaros. The Flying V was homesteaded in 1902 and became a guest ranch in the 1920s, and during its heyday in the 1940s, there reportedly was a waiting list of more than a year to book a stay. Guests stayed in cottages and the main ranch house and paid $12 per day in 1948. The ranch closed in 2001. 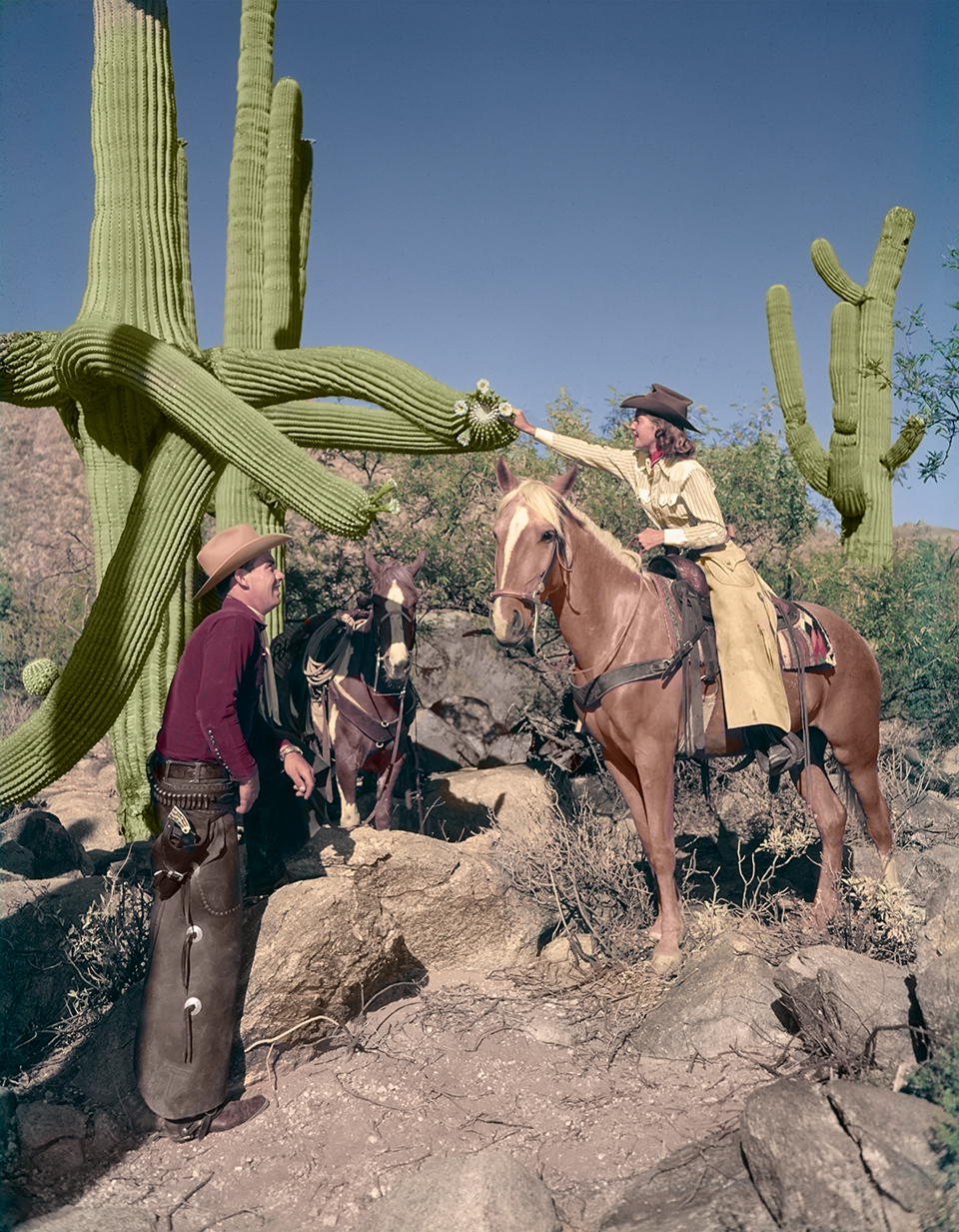 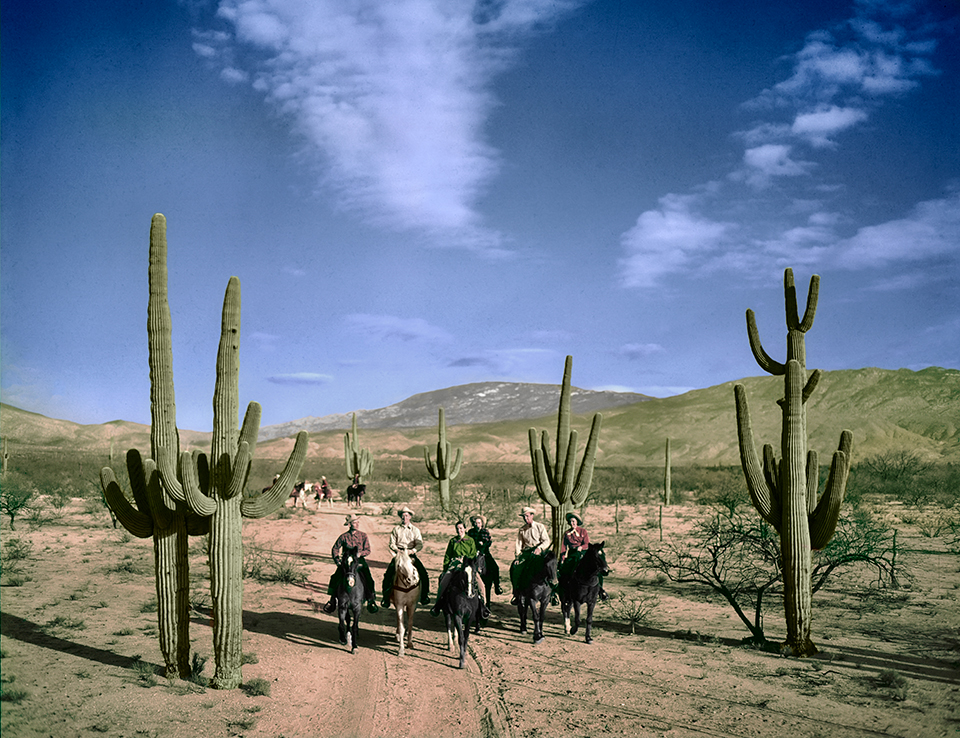 Winter visitors at the Silverbell Guest Ranch near Tucson take a trail ride amid tall saguaros beneath the Santa Catalina Mountains. The ranch was on Silverbell Road on the west side of present-day Interstate 10. In the late 1940s, it touted accommodations for 33 guests in adobe cottages during an operating season of November through April. The ranch was sold in the mid-1960s and had closed by 1970.